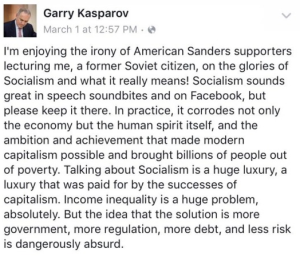 We called them the Communists, after the ruling party, but the country was The Union of Soviet Socialist Republics. (Союз Советских Социалистических Республик or Soyuz Sovetskikh Sotsialisticheskikh Respublik) Battle of Quotes.

Commenting (third hand) on a Twitter “conversation” about Socialism, SiGraybeard had a few comments, but his link to Kasparov deserves to be repeated.

There are still plenty of people who escaped from the old Soviet Union and Warsaw Block living in this country. It is sad that they are not sought out by the media more. They lived through Socialism.

But then the media won’t even report on what is going on today in Venezuela.