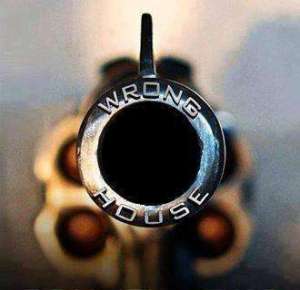 Maybe he thought he was in New Jersey. Police: Homeowner shoots, kills intruder while on phone with 911.

I suppose the gun-hating Left thinks this woman shouldn’t have been able to protect herself.

The female homeowner told police she was awakened by someone banging on her front door. She did not answer the door because she didn’t recognize the man or his vehicle. Shortly thereafter, the woman heard the back door being kicked in, retreated to another room, and called 911.

When confronted by the intruder, she shot him. (Texas, after all.)

The would-be bad-guy died at the scene.

Self-defense is a human-right, and in Texas it is your legal right.