Firefighter numbers are falling because people are no longer volunteering. And volunteer firefighters cover most of the country.

“In most of the country, volunteers are the predominant workforce protecting the country,” Donahue said. “And so even during disasters, a lot of the help and work is done by volunteers.”

Of the nearly 30,000 fire departments in the U.S., about two-thirds are all-volunteer. Since 2015, the number of volunteer firefighters has fallen to 682,600 from 814,850, according to the National Volunteer Fire Council.

And expecting the federal.gov to fill the gaps is just insane. (“I’m from the government and I’m here to help.”) There is an interesting interview with a fire chief from St. Bernard Parish District Fire Chief Mike LeBeau about the post-Katrina response from FEMA. Virtually all of the help went to New Orleans.

So what does this mean in the event of a disaster? It means that 72 hour mark that the federal.gov used to talk about is unrealistic. It will be a week or two before you get help.

Barrington said states have been told to expect up to 72 hours for a federal response, but in some cases it will take days longer.

“We’ve learned through some of our exercises, through Cascadia, which was a national exercise, that maybe it’s more realistic to expect that help in a week and maybe two weeks,” Barrington said. “With those kinds of time frames, it’s very important that the citizens be able to have the resources available that they can survive and live for multiple days without help.”

Here’s a look at what it was like on Day 3, after Superstorm Sandy hit New York City. Consider that the people in New York had DAYS to prepare. New York City water is actually some of the best in the country, and yet people were relying on (very small stockpiles of) bottled water. Hint: You can drink tap water collected BEFORE the disaster strikes. And no, water does not go bad in any way, unless algae grows in it. (Store it in a dark place, or a dark container. And make sure you have enough stored.)

But back to the original article. ‘EVERYBODY IS A FIRST RESPONDER’

“We’ve kind of built up this mythology that somebody is going to be there and save you,” former FEMA administrator Craig Fugate said. “And the person that saves you is maybe yourself or your neighbor.”

In parts of the country, ordinary Americans are learning about what disasters they can expect and how they should be prepared for the aftermath.

You’re an adult. Start taking adult responsibility for the safety of yourself and your family. Big Nanny is not going to wipe your nose after a disaster.

At this point it seems appropriate to include the Graham Combat Killhouse Rules. 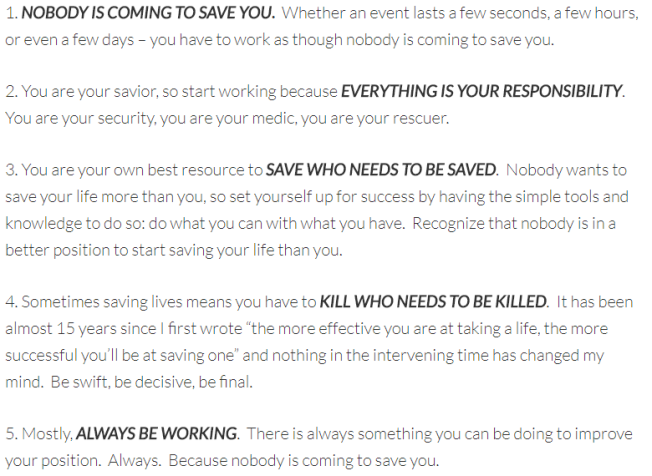 6 thoughts on “Everybody is a First Responder”