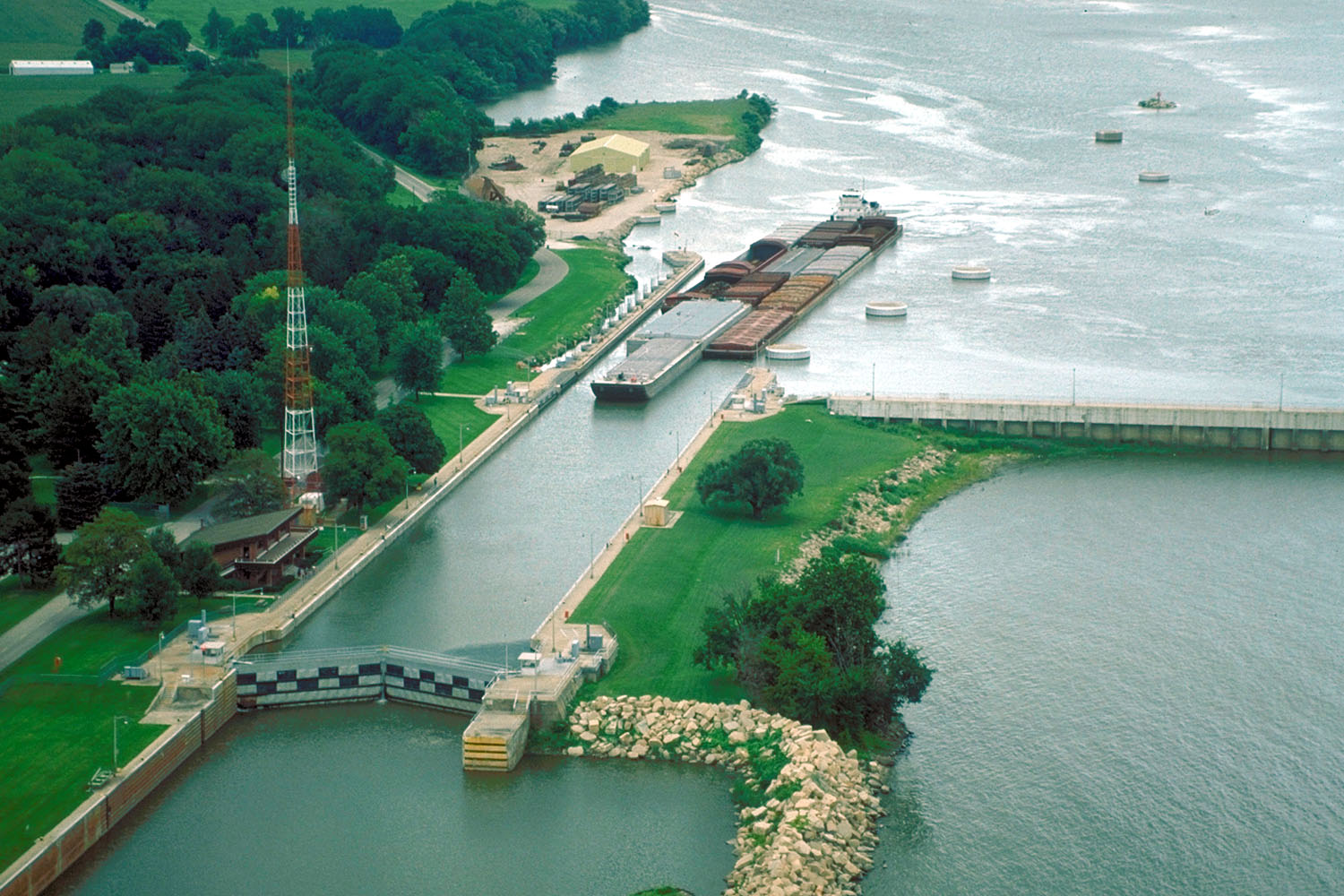 Locks and dams are a part of our infrastructure that usually only make the news when they fail, but they can serve important functions.

The Illinois Waterway is a series of canals, dams and locks that make it possible for boat traffic (mostly barges and some recreational) to travel from Chicago and Lake Michigan to the Mississippi River.

The image above is of the Starved Rock Lock and Dam on the Illinois Waterway, near Starved Rock State Park, just southeast of Utica, Illinois. Click the image for a larger view. It is fairly typical of the locks on this waterway. The photo shows a towboat with 13 barges on tow entering the lock. Even though they are virtually all pusher-style boats, they are still called towboats.

It is good to see some maintenance being performed to this infrastructure. Illinois Waterway Lock Closures Begin.

The other 2 dams won’t be closed entirely, not that it will make much difference overall to shipping.

The work being done there is to prepare for more advanced work to be done in 2023.

The Starved Rock Lock and Dam is fairly typical of dams on this waterway. It was built in 1933. It is what’s known as a Panamax lock, the same size originally built in the Panama Canal. The lock is 600 feet long by 110 feet wide. That isn’t large enough to handle the typical 15-barge tow, plus towboat, so tows have to be broken up and passed thru the lock in turns. That lock raises or lowers boats by 19 Feet.

This work and the necessary closing of the waterway has been planned for a couple of years, and as mentioned above some of the work being done this year is just to get ready for more extensive work planned for 2023. It is a problem because the work will continue through harvest, and grains are one of the primary things carried by barge. It is so much more efficient to transport by water than to go by rail or truck, as long as you want to go where the river takes you. Comparison of Cargo Capacity Between Trucks, Trains and Barges

A standard-size barge operating on the Mississippi River has a cargo capacity of 1,500 tons, or 52,500 bushels, which works out to a colossal 3 million pounds. … Barges are normally tied together into 15 barge “tows.”

That 15 barge tow is roughly 225 jumbo-hopper rail cars, or a fleet of 870 53-foot dry vans. And the fuel required is much less, considering, though the speed is also less.

So we are taking care of our infrastructure, or at least some of it.