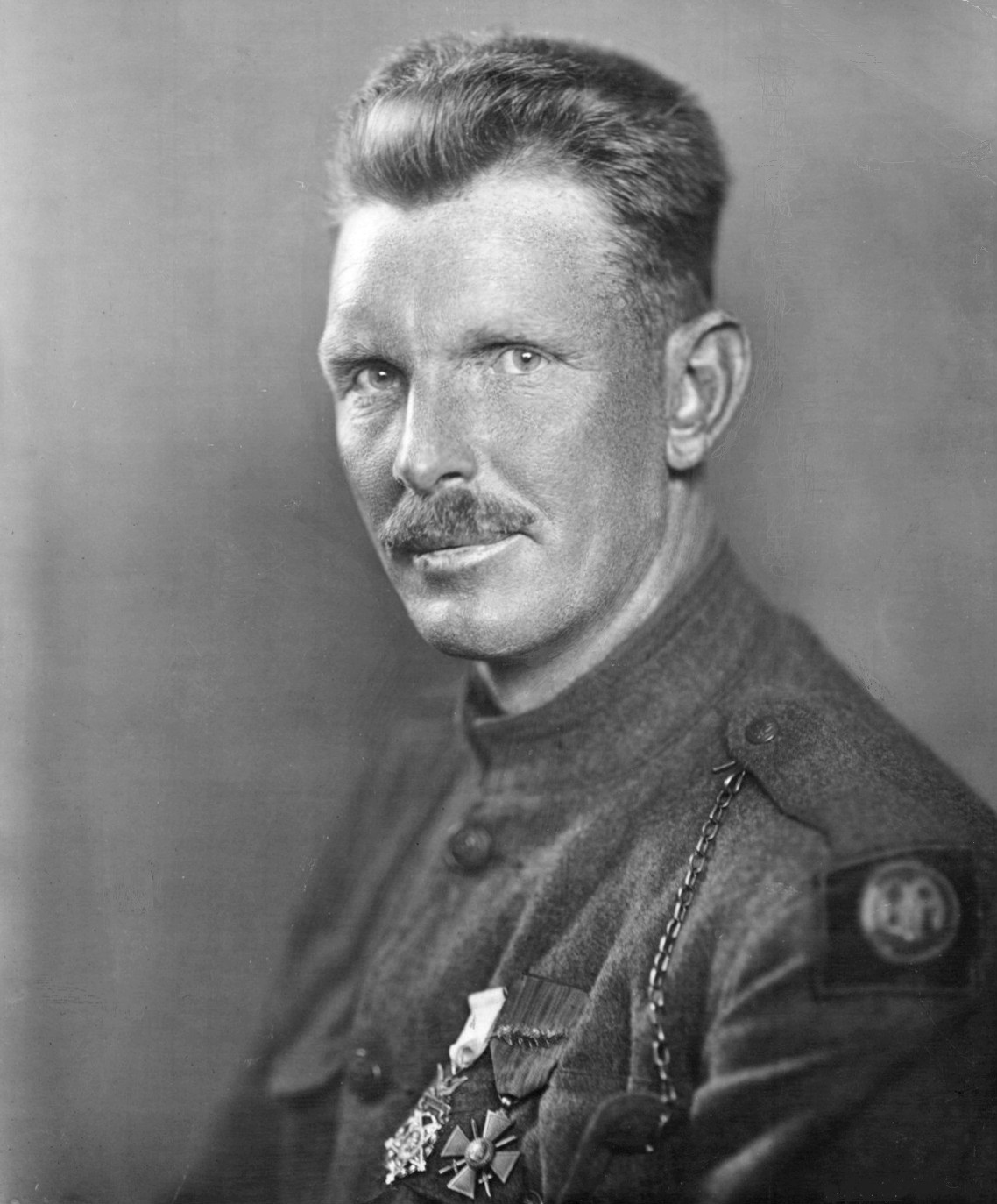 Medal of Honor recipient Sergeant Alvin York. He was born on December 13, 1887, and he died September 2, 1964. The image, Copyright Underwood & Underwood, is a 1919 image of the sergeant after his promotion. Click for a larger view and some more info.

York served in the 82nd Division of the US Army, which today is usually known as the 82nd Airborne Division. (That’s important for the Musical Interlude part of the post.)

On October 8th, 1918, during the Meuse-Argonne Offensive, Corporal Alvin York’s battalion was assigned to capture German positions near Hill 223. For his actions that day, he received the Distinguished Service Cross, was later awarded the Medal of Honor, promoted to the rank of Sergeant, and he was also decorated by the French receiving the Croix de Guerre, the Medaille Militaire and the Legion of Honour.

So what did he do to achieve all that?

On October 8, 1918, Corporal Alvin C. York and sixteen other soldiers under the command of Sergeant Bernard Early were dispatched before sunrise to take command of the Decauville railroad behind Hill 223 in the Chatel-Chehery sector of the Meuse-Argonne sector. The seventeen men, due to a misreading of their map (which was in French not English) mistakenly wound up behind enemy lines. A brief fire fight ensued which resulted in the confusion and the unexpected surrender of a superior German force to the seventeen soldiers. Once the Germans realized that the American contingent was limited, machine gunners on the hill overlooking the scene turned the gun away from the front and toward their own troops. After ordering the German soldiers to lie down, the machine gun opened fire resulting in the deaths of nine Americans, including York’s best friend in the outfit, Murray Savage. Sergeant Early received seventeen bullet wounds and turned the command over to corporals Harry Parsons and William Cutting, who ordered York to silence the machine gun. York was successful and when all was said and done, nine men had captured 132 prisoners.

His actions were ignored, and then in usual American media fashion blown out of all proportion. Others were ignored, it took until 1927 before two others, Sergeant Early and Corporal Cutting, would be awarded Distinguished Service Crosses.

By the end of the engagement, York and his seven men marched their German prisoners back to the American lines. Upon returning to his unit, York reported to his brigade commander, Brigadier General Julian Robert Lindsey, who remarked: “Well York, I hear you have captured the whole German army.” York replied: “No sir. I got only 132.”

And so we get another bonus Musical Interlude this week. I’ve put this in Metal for Mondays, for my own benefit, even though today isn’t Monday…

This is “82nd All The Way” by Amaranthe, a cover of a song originally by Sabaton. They released this song in January of this year, ahead of their COVID-19-canceled summer tour. Here’s a link to the lyrics for completeness.

There is a 1941 Hollywood biography of his life, Sergeant York. It stars Gary Cooper. I don’t think it is particularly good, and it is way too long. As I write this it is currently available on YouTube. Free in incredibly low resolution, and paid for higher definition. Though of course that may change at any time.

A COVID-19 Musical Interlude? Sort of. Given that we’ve all been locked up or locked down or whatever it is, I guess it is not surprising that artists pull inspiration from these circumstances. Amaranthe has done exactly that.

As for an explanation of Amaranthe, I will steal shamelessly from myself

Amaranthe is a bit hard to categorize. Some Death Metal. A touch of Beauty and the Beast (the Gothic Metal sub-genre, not the musical). Some call them Metalcore (a mix of Metal and Hardcore Punk), some call them Melodeath (Melodic Death Metal.) A lot of their stuff has a distinctive pop flavor, I think that comes from the nature of Elize Ryd’s voice. They have 3 vocalists, to cover all those bases.

This song is “Viral” by Amaranthe from their upcoming album (October 2nd) Manifest.

And I do really like being tied into the new music, especially music that I love.

So is this appropriate for the Holiday weekend? Probably not, but then the holiday weekend hasn’t been the best.

There aren’t too many women doing the Death Metal, Death Growl. Angel Gossow is one of the best. I can’t say she beat others to that, but she was lead singer for Arch Enemy until 2014. Since then she has managed a couple of groups including Arch Enemy and Amaranthe. This is the first musical outing since she left Arch Enemy.

Amaranthe is usually Nils Molin doing clear vocals, Elize Ryd singing soprano and Henrik Englund Wilhelmsson doing “harsh” vocals, though I don’t think he sings on this song. Morten Løwe Sørensen on drums and Johan Andreassen on bass and Olof Mörck playing guitars and keyboards round out the group.

This is “Do or Die” by the group Amaranthe featuring vocals by Angela Gossow. It from the 2020 album Manifest, which is due to be released in October. You can find the lyrics at this link, because Death Growl.

More Amaranthe? Why not. Here’s a ballad.

Elize Ryd was a subject of post over at The Daley Gator after I posted a song by Amaranthe for Metal for Monday a while back. So here is more Amaranthe, with a song that is mostly the soaring voice of Elize Ryd. (Enough guitars and drums for Heavy Metal, even if there are violins as well.)

This song is “Endlessly” by Amaranthe from their 2016 album Maximalism. And while this is a ballad, it is off a Heavy Metal album, by one of my favorite Heavy Metal groups. Deal with it. It is the kind of song that makes the head of those American music suits, with their tiny minds, explode. (You mean all metal isn’t thrash?)

OK my original post and the Daley Gator post was a LONG while back. This post was written back then, and kept getting pushed. I’m not exactly sure why that was now…

Amaranthe is a bit hard to categorize. Some Death Metal. A touch of Beauty and the Beast (the Gothic Metal sub-genre, not the musical). Some call them Metalcore (a mix of Metal and Hardcore Punk), some call them Melodeath (Melodic Death Metal.) A lot of their stuff has a distinctive pop flavor, I think that comes from the nature of Elize Ryd’s voice. They have 3 vocalists, to cover all those bases. Elize Ryd, Nils Molin and Henrik Englund Wilhelmsson. There is something for everyone.

This song is “The Nexus” by Amaranthe from the 2013 album The Nexus.

Amaranthe has been all over my Heavy Metal playlists recently. They are a Swedish band (don’t worry – English lyrics) known for having 3 lead singers. Elize Ryd sings in a clear style that is not quite Symphonic Metal (or maybe it is), Henrik Englund Wilhelmsson is doing something very much like the Death Metal, Death Growl, and Nils Molin is singing in the Power Metal style. They end up sounding a little pop, but with definite Heavy Metal foundations. I like them.

This is “Dream” by Amaranthe from their 2018 album Helix. (Use the link when YouTube says the video is “unavailable.” They really hate the privacy settings in your browser.)

Lyrics are at this link, because it is Metal.

Amaranthe is a band that even has trouble describing itself. Their music is in an uplifting style that has been described as everything from Dance Rock to Metalcore to a cross between Melodeath and Pop Music. Though everyone agrees that they are in fact Heavy Metal.

Elize Ryd sings in a clear style that is not quite Symphonic Metal, Henrik Englund Wilhelmsson is doing the Death Metal, Death Growl even though they are not singing about death, or any of the other things you usually find in Death Metal, and Nils Molin sings in the clear Power Metal style. I like it.

This is “Drop Dead Cynical” by Amaranthe from their 2014 album Massive Addictive. If YouTube trips over the privacy settings in your browser, use the link provided.

Amaranthe is known for having 3 lead singers. Nils Molin sings clear vocals in the Power Metal style, Elize Ryd sings in the clear soprano, Symphonic style, and Henrik Englund Wilhelmsson does the Death Metal Death Growl. (Can you guess they are Swedish?). Even with a fair amount of Heavy Metal elements some of their songs come off a bit pop. But I like them.

This song is “Inferno” by Amaranthe. It is from their 2018 album Helix. It was the third single from that album. (YouTube will trip over the privacy extensions in your browser and tell you the video is unavailable. When that happens, use the link provided.)

Amaranthe released a new album in October of 2018. So I thought I had better give it a test drive.

This is “The Score.” It is the first song on the 2018 album Helix by Amaranthe. (A Swedish/Danish Heavy Metal Band – don’t worry the lyrics are in English.)

I really like the fact that Amaranthe has 3 lead singers. Though people tell me they sound more pop than metal… And I know I should put more effort into New Year’s Eve, but I just don’t have the energy.

This song is “Digital World” by Amaranthe from their 2014 album Massive Addictive. (YouTube. Browser Privacy Extensions. “Unavailable.” Use link above.)

Amaranthe is a Heavy Metal band from Gothenburg, Sweden (don’t worry the song is in English) known for combining pop and Death Metal. They have 3 lead singers. Elize Ryd is singing clear soprano vocals. On this song from 2013 Joacim “Jake E” Lundberg is singing clear tenor vocals and if it was used on this song, Andreas Solveström would be doing the Death Growl. No Growling on this song. (The membership in the band has been a fluid over the years.)

This is “Burn With Me” from 2013 album The Nexus by Amaranthe.

More Swedish Heavy Metal? Sure. (We started that before the holidays.) The first song is “Maximize” by Amaranthe. The 2nd by the same group is “True.” (It is after the break.)

Amaranthe is a bit hard to categorize. Some Death Metal. A touch of Beauty and the Beast (the Gothic Metal sub-genre, not the musical). Some feeling of pop. Whatever. They are a good hard rock band.