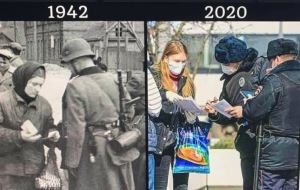 The image at the right is courtesy of Woodsterman (link at the bottom). It is too good not to include.

Been a while since we had a simple links post …
● Tomorrow is “Take Yourself to Work Day” in Michigan. 🙂
● Eric Peters says reopen and reject.

EBL – Kayleigh McEnany is on fire 🔥.

DemoNazi Governor Of Illinois Threatens Business Owners With A Year In Prison If They Try To Reopen – Gateway Pundit
Last week Illinois Democrat Governor J. B. Pritzker … later told CNN the citizens of Illinois could be ordered to socially distance and wear masks indefinitely.

Catholic Church Of Minnesota To Defy DemoNazi Governor’s Restrictions On Mass – Alphanews
Minnesota’s Catholic bishops say that they will be reopening churches for mass at 33% capacity.

LB1901 – Morning Coffee – The business of America is business.

“If you have a problem figuring out whether you’re for me or Trump, then you ain’t black” – Biden to black radio host
But that’s not racist, or anything

NY AG threatens law firm claiming office headcount violates Cuomo lockdown, gets sued in response
More of this, please. Let’s use the force of government against these thugs

In addition to certifying fraudulent results to help Democrats, DeMuro also took a hands-on approach to voting fraud: “Demuro fraudulently stuffed the ballot box by literally standing in a voting booth and voting over and over

And again from EBL – Don Giovanni 🎭

A View From The Beach – Russiagate: Flynn Judge Ordered to Explain.

Ace is gonna run out of red ink, FBI Offered to Pay Christopher Steele “Significantly” To Dig Up Dirt On… Michael Flynn, “Why does Christopher Wray still have a job? Or his physical freedom? All he does is cover up crimes.

MaddMedic at Freedom Is Just Another Word… – Ridiculous…

Nice term for Concentration Camps? Voluntary???
Written order shows state falsely claiming ‘isolation camps’ are ‘voluntary’
How many guns are out there?

Wendy McElroy – News and commentary round up.

I leave you with Cartoon Round Up…. from Theo Spark, Thursday Memes … from MaddMedic at Freedom Is Just Another Word… and Bad Smelling Libturds Thursday ~ Afternoon Edition from Woodsterman.

One thought on “Saturday Roundup of Link Roundups”